The inaugural meeting of the CAMBRIDGE GLIDING CLUB was held on February 12th 1935, the Club's formation having been sanctioned by the Proctors of the University on he previous day. It was founded by a group of undergraduates which included John, Duke of Grafton, John Paget, Oliver Fitzwilliam, Ralph Slazenger, Don Maclement, Keith Turner and John Pringle, who had been gliding at the London Gliding Club at Dunstable. Paget was President, Pringle Treasurer and Turner Secretary. 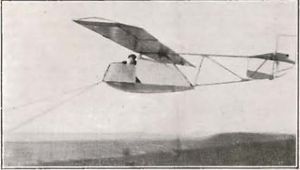 The Cambridge Gliding Club's first machine being taken off Dunstable Downs by the Duke of Grafton. From S&G April 1935

The Club was originally founded by and for the members of the University, and on May 16th 1935 changed its name to the Cambridge University Gliding Club. Slazenger provided a Zogling and a B.A.C. VII two-seater, and the first winch launch took place at Caxton Gibbet on the following day. Before the outbreak of the Second World War in 1939, the club had pioneered soaring from winch launches, and had made a name for itself by running camps at hill sites in Dorset. Aerotowing had been undertaken from both Marshall's Airport, Cambridge, and R.A.F. Duxford, where the first soaring took place on March 6th 1939.

After the war the Club extended its membership ouside the University, and to an ever-increasing extent became the local gliding club. Flying recommenced in February 1946, initially at Caxton Gibbet and at Marshall's but then from Bourn airfield. training was by the solo method until 1950, when the Slingsby T21b Bluebell was bought. Ted Warner joined the club as Ground Engineer in 1946 - and stayed as the sole employee until his retirement in 1985, having taught generations of pilots (especially undergraduates) to fly. He was succeeded by Sandy Torrance.

From 1951, after a brief spell at Gransden Lodge, all the club's operations were concentrated at Marshall's, aerotows being provided by a Marshall's Tiger Moth when required. The Club fleet grew to include a second two-seater, and the first private glider was 'admitted' in 1960. For many years regular camps at the Long Mynd, home of the Midland Gliding Club, were a popular part of the Club's activities.

By 1968 the pressure of air traffic at Marshall's had made it necessary to seek an alternative site for winching, and the lease of the by-then disused Duxford airfield was negotiated. After a period of some years the restriction of aerotowing at Duxford was lifted and the Club was able to unite its operations there. The number of gliders, especially those belonging to private syndicates, grew steadily.

In the mid-70s, however, Cambridgeshire County Council bought the airfield and entered into an arrangement for its shared use by the Imperial War Museum. Unfortunately the Museum's presence eventually led to unacceptable curtailments of the Club's weekend flying, and in 1991 it had to move once again to its presence site at Gransden Lodge. In 1990 the Club's first 600km flights were made, a fitting conclusion to the Duxford years.

The Club's influence on British gliding has been considerable. In the early days many undergraduates whom it trained went on to positions of responsibility in other clubs, taking Cambridge's training methods with them. It was well-known for its camps and expeditions flying, and for its contributions to gliding theory and to test-flying. Year after year it produced about a tenth of all British Silver C's, and has always been one of the principal clubs in terms of cross-country flying.

In 1985 the Club celebrated its Silver Jubilee, and has by now fully assumed the role unwittingly foreshadowed by the founding members when they christened it the CAMBRIDGE GLIDING CLUB.

In 1996 the club split into the Cambridge Gliding Club and the Cambridge University Gliding Club. CGC was now an ordinary gliding club and CUGC a true university club. The two continue to operate side-by-side from the same airfield. Indeed CUGC is affiliated to CGC and uses its airfield, aircraft and clubhouse.

However in a similar way to CGC, CUGC had to start again from scratch. From its first year with just a few members, it grew to a thriving club of around forty members. In 1998 CUGC was the beneficiary of a legacy which enabled it to buy its first glider, a newly refurbished and immaculate Schleicher Ka8b "CU", imported from Germany. The glider continues to provide the early solo facility for club members and can often be seen on expeditions around the country. In 1998 CU flew in the Inter-University Task Week held at Sutton Bank, hosted by Durham UGC, coming away with the silverware for wood class. The following year the IUTW was hosted by CUGC at Gransden Lodge. In 2000 another legacy enabled CUGC to buy an enclosed trailer for CU and it flew its first Silver Distance flight in this country in June of that year.

Since this time, the club has continued to grow, and now numbers about 40 members in any given year. We regularly run trips to other sites (such as visiting Oxford and Edinburgh universities) and for the past two years have had club members entering the UK Junior National Gliding Championships.

Into the mid 2000's the club has continued to prosper, the original CU has been sold and replaced by new CU an ASW-19b with significantly improved performace. The Club still runs regular expeditions as well as taking part in the Varsity match with Oxford and the Inter-University Comp. In 2013 a formal gliding team was established the "Sky Lions" who were to represent the university in competitions.