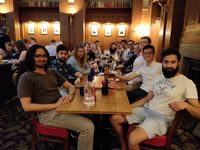 Awarded for the greatest cumulative height gain in a flight that is under 50 minutes, following varsity rules. The winner of this trophy is the winner of the cuppers competition. GPS traces should be submitted to the committee or president for scoring, in the format discussed on the linked page.