Difference between revisions of "Portmoak 2019" 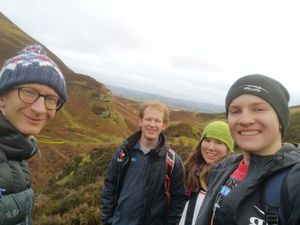 Chris, Eszter, Timo, Rob, Jenn and Glendon ventured up to Portmoak for the 7th to 14th of December 2019. Initial forecasts were pessimistic. After a very wet autumn, Gransden was flooded and there was a lot more rain in the forecast, and we initially feared we wouldn't be able to fly all week. However, the weather pulled together and we got four flyable days in the end, with the ridge working on three, and wave on two.

A trip to the pub on Saturday fixed up our moods after a long journey north in convoy throughout the day. Sunday was definitely rained off so we did some shopping and caught up on any outstanding uni work (or tried to...). We planned to go to a trampoline park, but on a wet Sunday it seemed like the whole of Glenrothes had the same idea and we decided that it would be inappropriate for 6 (or maybe 5...) adults to descend on a trampoline park full of children. Glendon took over the kitchen and cooked us some lovely food for which we were all very grateful. He really showed off a hidden talent during the week.

Monday was a lovely day, with 15kt westerly winds making the ridge work well. Everyone got a flight in for a decent time, with Chris and Timo flying solo after check flights. There was weak wave about, with us getting up to around 4000'. Not bad for a winter day, and much better than at Gransden! At this point we were considering going home after the instructors didn't predict any more flying for the rest of the week - but thankfully we stayed. 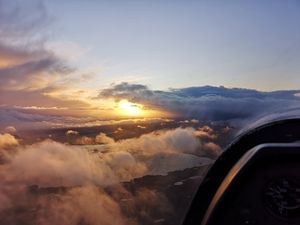 Tuesday was another rain day. More frantic uni work with Eszter's report deadline approaching faster than she could type. We went Go-Karting in the evening in Edinburgh and had a lot of fun. Glendon wins the prize for most improved, cutting his time down by nearly 40% over the few sessions, while Eszter wins the prize for most aggressive (and painful) driver. Chris, of course, was fastest.

Wednesday was a very windy day with about 15 G 25kts. Everyone was required to fly with an instructor, but the wind meant the ridge was working well and we all got to about 3000'. Chris took the last launch of the day and saw a wonderful sunset from 3000', shown in the picture. However, flying in the clouds and with cold temperatures, the airbrakes froze close and a sideslip landing was planned, until they unseized at low level. A useful lesson learned, but a stunning flight nonetheless. 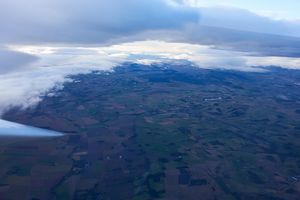 Thursday was flyable but with light winds, so the ridge didn't work. Jenn and Rob stayed behind to get some circuit practice while the rest of us went walking in the local hills to a reservoir.

Friday was not forecast to be good but turned out to be the best day of the week. Chris and Timo started early with check flights to be allowed to go solo in the Junior. The wind was in the right direction and wave had setup on the local ridge. We easily got to 4000' on the check flights and had to come down to give others a go. Chris went off in the Junior soon after and got to 8200' (and could have got higher if he wasn't called to come down...). Fantastic views, but extremely cold and he suffered from exterior icing on his descent. Unfortunately the wind died down into the afternoon and the wave weakened, but still a fantastic experience for those who got the chance.

As with last year, it was a fantastic week. Hours flown ranged from 3 to 6, with each of us flying on at least 3 days. Our thanks go to the staff and instructors at Portmoak for being fantastic hosts once again. We'll be back in December 2020.