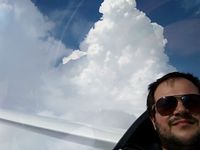 In 1938 a Polish pilot Tadeusz Góra flew first ever above 500km distance in a glider. For some time, it was my ambition to follow in his footsteps (or rather - cloudsteps). I achieved that on Sunday, 15th July 2018 in ASW19B “CU” belonging to the Cambridge University Gliding Club.

Having ambitious plans, it is worth looking for an inspiration from others who had previously done remarkable things. Tadeusz Góra was an obvious choice for me - I am still hugely impressed by his achievement. Especially that it was much more difficult then, without modern, fibreglass gliders and (more or less) precise weather forecasts. The achievement of Góra did not pass unnoticed – he was the first-ever recipient of the Lilienthal Gliding Medal – the highest award in gliding.

For the sake of planning such a long flight, one should have several tasks pre-planned to select from on the day, to suit the weather properly. I have decided on choosing the same task as one of the most inspiring flights I have seen since joining CGC/CUGC – Mark Lawrence-Jones’ first 500km in August 2016. The aim was to fly 503.8 km triangle via Framlingham (FRW), Tuxford Junction (TUJ) and Bicester Control Tower (BIC) turnpoints. 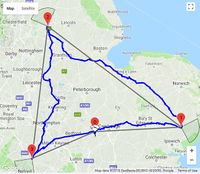 The task fitted the weather nicely, though the day was so good that probably many others would also have had been suitable. The first turnpoint has kept me on the edge of my seat with little thermal activity due to the gentle sea breeze that managed to move upwind. However, thanks to a very high cloud base of about 6000ft, I had plenty of height to trade for distance to turn FRW and return to the good weather on my way to TUJ. 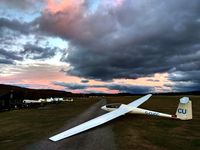 I had found a gliding paradise between FRW and TUJ, with very strong thermals that were exactly where I was expecting them. Things got more challenging past TUJ, as it blued out completely. I was looking longingly at the cumulus clouds far in the southeast. Unfortunately, flying to them had meant taking a big detour, which, analysing in hindsight, would probably had wasted too much time. I am glad, that I took my chances flying through the blue, successfully finding and recognising hot spots on the ground – a source of decent, unmarked thermals.

My hopes were very high when turning BIC, but the day started to decay. Small cloud street, that I had found just before BIC, begun to disperse when I returned to it… Luckily, the thermals emitted off Milton Keynes, allowed me to gain sufficient height to embark on a final glide to Gransden Lodge. With a gentle wind, stable air and the sun setting behind my back, that final glide was one of the best and most pleasant aviation experiences ever. The task was accomplished after strenuous seven hours and twenty minutes. My achievement was not without a reward – I received the FAI diamond distance award and two bottles of bubbly drink.

Have I summed up what allowed me to achieve it, I would enlist: inspiration, preparation and perseverance - without it, there would not have been five attempts at flying 500 km.

Last but not least, I would like to express my gratitude to Haluk Yildiz for being my retrieve crew, Mark Lawrence-Jones for officially observing my achievement and the CGC/CUGC instructors and members for making all of this possible.